Socioeconomic Status in Adolescents: A Study of Its Relationship with Overweight and Obesity and Influence on Social Network Configuration

Socioeconomic Status in Adolescents: A Study of Its Relationship with Overweight and Obesity and Influence on Social Network Configuration

Socioeconomic status (SES) influences all the determinants of health, conditioning health throughout life. The aim of the present study was to explore the relationship between socioeconomic status and obesity in adolescence through an analysis of the patterns of contact between peers as a function of this parameter. A cross-sectional study was performed, analyzing a sample of 235 students aged 14 to 18 and 11 class networks. Social network analysis was used to analyze structural variables of centrality from a sociocentric perspective. We found that adolescents with a medium-low SES presented a two-fold higher probability of being overweight, but we did not detect any differences in the configuration of their social networks when compared with those of normal-weight adolescents. However, we did find significant differences in the formation of networks according to SES in the overall sample and disaggregated by gender, whereby adolescents with a high SES in general presented a higher capacity to form wider social networks. Elucidating the relationship between SES and overweight and its influence on social network formation can contribute to the design of preventative strategies against overweight and obesity in adolescents, since their social environment can provide them with several resources to combat excess weight. View Full-Text 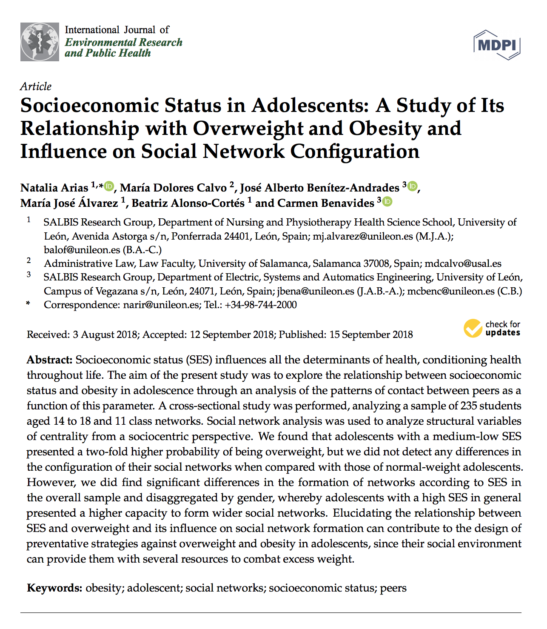